How does an airplane toilet work?

Ever wondered what happens to the waste from an airplane toilet? And how exactly do these airplane toilets work? Many of us probably wondered if the waste just gets dropped from the plane, but no one would really appreciate having that dropped on your property or yourself! Contrary to popular belief, it is not dumped mid-flight over unsuspecting victims.

So how does it work? Most toilets found in our residential homes, are revered to as gravity toilets, because they do after all rely on gravity to work. When you flush these toilets, the water is pulled down into the sewer system pipes and it is refilled with clean water. But on an airplane, the same gravity system does not work, as water will be splashing out the airplane toilet bowl every time a little turbulence occurred. So instead of using the passive siphon system regular toilets use, airplanes use what they call vacuum systems. When you flush a airplane toilet, a valve opens in the sewer line and sucks the waste into the line, out of the bowl and into the septic tank on the airplane. Because the vacuum sucks everything away, very little liquid is required and usually a tiny amount of blue sanitizing liquid pushes into the bowl after a flush. The waste goes into a tank which is thoroughly cleaned and sanitized by the waste crew at the airport, employed specifically for this purpose.

It was James Kemper who invented the vacuum toilet in 1975 we use today in our airplane plumbing. Before, airplanes used Anotec (that blue deodorized liquid you see in the bottom of portable toilets usually). The problem with this was that not only does it causes skin irritations should some splash damage occur, but the plane had to carry less passengers to accommodate the hundreds of liters Anotec, also causing the airplane to be heavier on fuel.  Another set-back, was that sometimes this blue liquid would leak out of the septic tank and form frozen balls of blue feces on the exterior of the aircraft. Thus, as the airplane drops altitude, these balls start to defrost and drops down to the land below.

Vacuum toilets do have added benefits. It uses much less water than regular toilets, only 2 liters or less compared to the 6- 12 liters a normal toilet uses. It also can flush in any direction, including upward, as it does not need gravity to move the water, which means in turn, they can be put anywhere in any building. 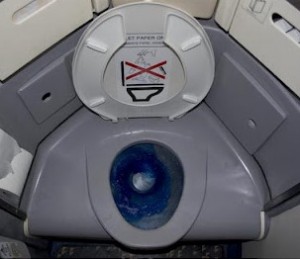